Injustice anywhere is a threat to justice everywhere.

Love is the only force capable of transforming an enemy into a friend.

~The following is taken from part of an chapel address I gave at my school last week. Other information has been added since then. The opinions contained are entirely my own. ~

The only child at a table of adults? The only kid who didn’t have the popular shoes?  The lone conservative in the family? The only person who didn’t get the joke?

Did it make you feel different? Strange? Uncomfortable? Left out? Other than?

Did you perhaps wish that if only – if only they could see me, know me, hear me – then they would understand?

This past week, we honored the legacy of Dr. Martin Luther King, Jr.

At times, I feel that Dr. King’s message of hope, love and justice is needed more today than back when he first began fighting the good fight.

In an age where a few unverified clicks on social media can ruin a person’s reputation; when a difference of opinion is grounds for the termination of a friendship or a job; where civility seems like an antiquated notion and offense seems to be our first response – yes, in this present age, it seems that what we truly need is a double dose of Dr. King.

Rooting out injustice in all its insidious forms seems like it should be such a simple thing. We all have hearts and souls, desires and dreams, the will to learn and try and plan and do. We all have the capacity to see one another, in all of our other-ness.

But if we have learned anything from the Holocaust and the myriad slaughter of innocents before and since, is that all it takes for injustice to advance is passivity.

There can be no spectators in the race for human rights.

It seems especially apt that on the brink of full blown war between Syria, Iran, and the nation of Israel, when missiles could be striking targets across the Middle East even as you read these words, that we take King’s words to heart.

He once observed, “Our scientific power has outrun our spiritual power. We have guided missiles but misguided men.”

We hear an awful lot about tolerance these days, and to be honest, it almost seems like the ones screaming the loudest are the least willing to see the other side. Perhaps, as my headmaster suggested last week, tolerance should not be our goal.

Was it not a twisted form of tolerance that led to the extermination of 6 million Jews, the proliferation of slavery, the shameful internment of Japanese Americans, even cyber-bullying?

And what of the 60 million babies slaughtered in the womb since 1973?  Or New York, who has now decided that killing a full term human person minutes from delivery is a reason to celebrate?

I weep for the babies who were never allowed to draw a breath and I weep for their precious mommies who thought that they had no other choice.

No, we must NOT tolerate these and any other forms of evil or hatred, but seek instead to eradicate them from our body. Standing passively by is NOT an option.

We must not, as the apostle Paul once wrote, be overcome with evil, but overcome evil with good (Romans 12:21).

But to do that, we must also understand. To recognize that EACH of us is the ONLY one.

I believe that we live in a society where we can not only see but live the manifestation of Dr. King’s iconic dream. Every day, I break bread with boys from China and Mexico and Korea and Japan, from uptown and downtown and north and east and south and west.

The faces before me reflect the manifold diversity and creative beauty of God’s tender hand, and I am grateful that there is no discrimination in His kingdom; His unconditional love is free to all nations, all tribes, all tongues. 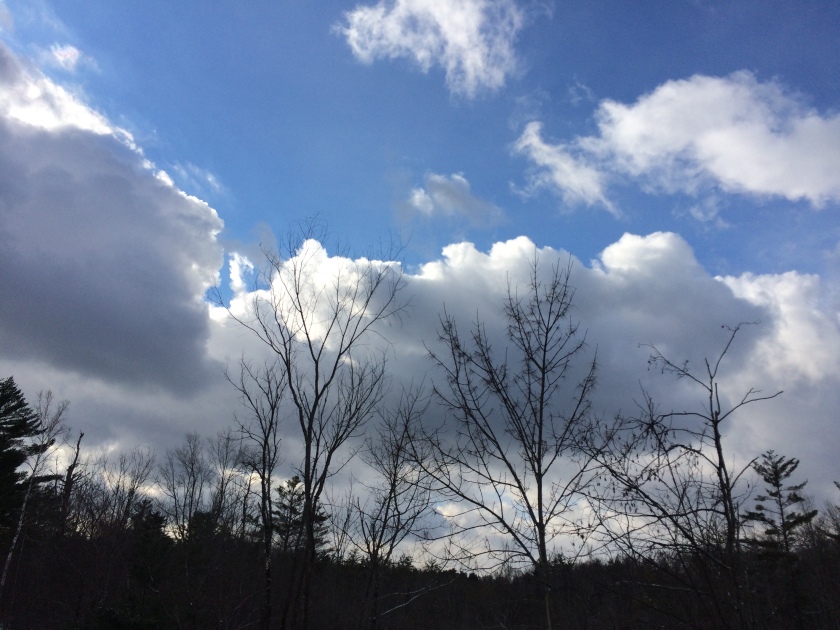 I pray that God would help us to love as Jesus loves.  To give us courage to ferret out evil and injustice, to tear each insidious occurence out by its very roots until no remnant remains.

I pray that we might steward our blessings well, that we may be a blessing to those who are poor, or marginalized, or forgotten.

I ask Him to help us to be gentle, humble, and unoffendable in our patience with each other.

And I pray that someday, soon, we will be joined together in perfect unity – one heart, one passion, one harmonious purpose – and that love would be the true mark of our maturity. 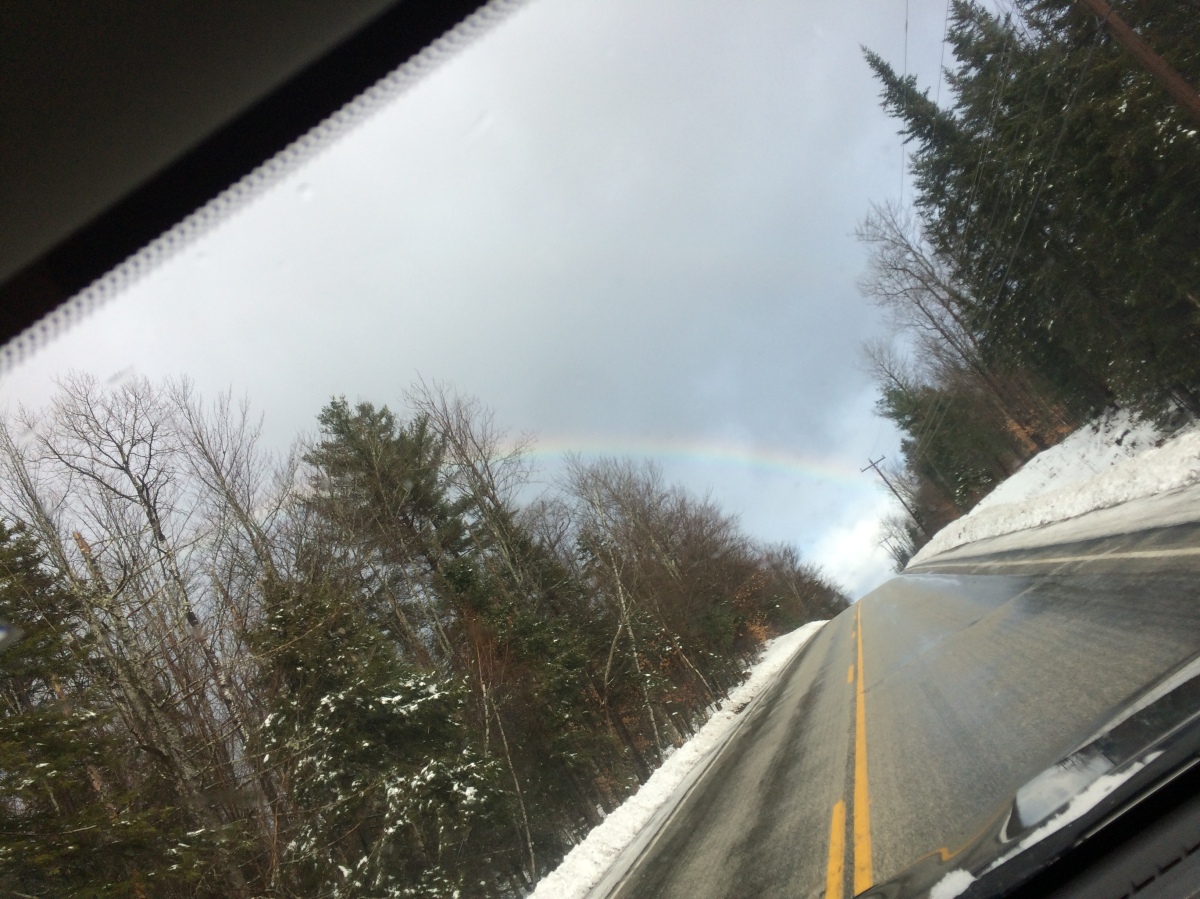 2019: The Year, if it is anything like 2019: Day One, has the potential to blow expectations out of the water.

The night before, celebrating New Year’s Eve with colleagues I am also blessed to call friends, the hosts dropped a cascade of balloons onto a bevy of squealing, twirling children at midnight-is-really-8 o’clock, so I was home in bed by 9:30. Perfect for an introvert like me, easily fatigued by conversation and social situations.

Waking up to snow always makes me happy, like memories of school closings scrolling across the bottom of a TV screen, hours of expectant potential right outside the front door. I was already imagining the sugar-dusted boughs overhead on the hike that was only a short drive away.

No way this day could be sealed with anything more prophetic. Capturing it while driving on the backroads of New Hampshire was a bonus.

It seemed fit to tackle timid 4,003′ Tecumseh as my first hike of the year, my first winter 4,000 footer, and the maiden voyage of the snowshoes I gave myself for Christmas.

Tecumseh, although least-by-height in the clan of the 48 New Hampshire 4,000 footers, is steep enough to call a work-out and a worthy proving ground for figuring out how to walk with clown shoes attached to my legs.

The Princess and her hubby were gracious as I tripped and apologized up the trickier parts and even agreed to a summit selfie. 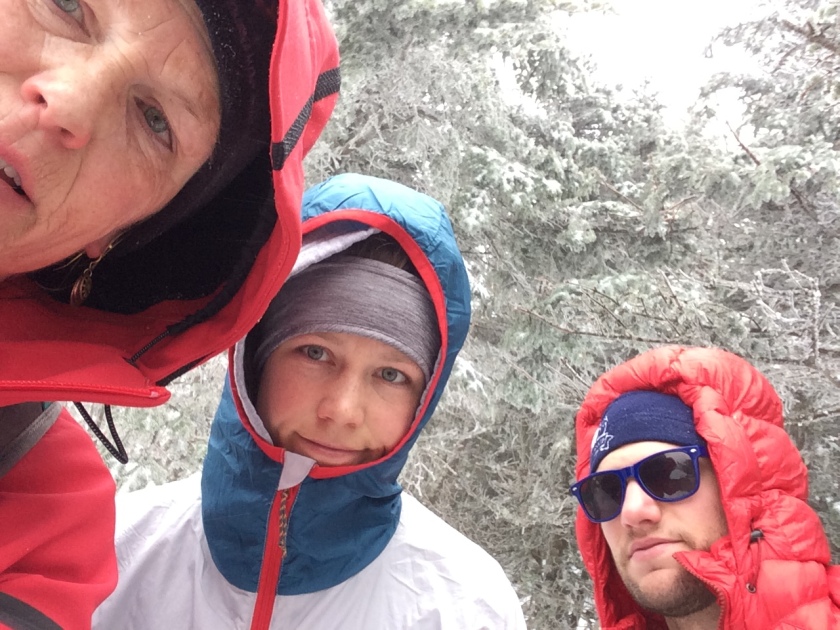 The predicted 50-70 mph winds picked up as we headed down, but most of Tecumseh is protected by a wooded barrier of hearty pines, so aside from a brief moment at the top, none of us minded the cold.

I didn’t even mind, back at the car, discovering the shredded hems of my rain pants, evidence of an embryonic spacial awareness between where shins ended and sharp claws of snowshoes began. Oh well – I needed a new pair anyway.

An exit on the ride home took me by the boy’s bench, so I stopped by to say hello.

Anna had left a wreath, and once again my heart swelled with thanks for the friends my son made while he was still here with us.

Do you know how much they loved you, silly boy?

Not much snow on the driveway and stairs when we arrived home, tired. Nothing that a quick shovel and a nap couldn’t fix.

Later, under winking lights, I eat dinner cooked not-by-me and watch some football with the fam.

Given the carnage of past years, the lightness I feel on Day One seems miraculous.

Perhaps this will be the year that God does exceedingly abundantly more than I can ask or imagine (Ephesians 3:20).

Actually, it seems as if He already has.